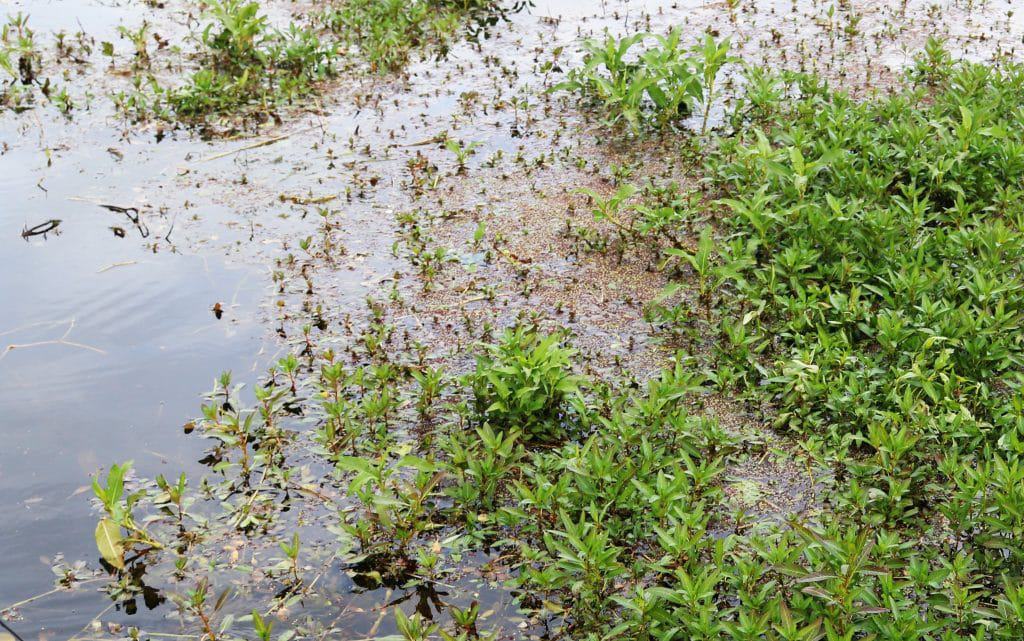 Obviously targeting bass where they live is going to be an effective technique, but what do you do when they’re hiding in the weeds. That’s where weedless lures come in and steal the show.

When you’re trying to fish heavy cover, shallow flats and lily pads there’s nothing better. (Here’s My Favorite Weedless Jig) If you’re going after bass and went the greatest chance of success you’re going to need to find a great weedless lure.

Regardless of where you are in the United States you’ll be able to find monster bass somewhere. Unfortunately you never know what those seldom used lakes are going to offer.

You need something thats snag proof enough to not get caught on all those weeds yet effective enough to really pull in the bass. Here are a few of my favorite weedless lures. Make sure you continue reading below for more info on each of these great bass lures.

Seems like everybody is becoming a jig fan, but not all jigs are created equal. Flipping jigs are by far the best jig you can use when fishing heavy cover. With its weed guard you can fish it through tall grass, duckweed lily pads and just about everything else you can think of. Due to its weedless nature it really will produce a lot of bass.

Bass anglers have long touted the benefits of a jig and pig combo in heavy weeds. (my favorite jig for heavy cover) You can really rip it through heavy cover and it shouldn’t snag up on your retrieve.  The weed guard is sturdy enough to fight weeds yet flexible enough to promote a lot of strikes.

If there’s one thing that hollow body frogs are good at its fishing through heavy cover. Out-of-the-box they might not be the best at actually landing bass, but with a few basic modifications they are hard to beat. With its structured body frogs are 100% weedless and they come over and across sloppy weed beds with ease.

I’m a little bit old-school and there’s nowhere that you can’t fish a plastic worm. Soft plastic worms really do excel in thick cover and there are a ton of great strategies to fish them there. Whether you choose a Texas rig, Carolina rig or some other unusual set up a soft plastic worm will bring in the bass.

Weedless lures come in all shapes and sizes, but the worm is easily one of the best weedless lures of them all.  Every manufacturer has there own style of plastic worm and it would be impossible to name them all.  I tend to favor Powerbaits Power Worms solely because they’re easy to find and the tail offers a realistic movement in the water.  With like 30 different color combinations you can match your worm to just about any conditions.

Personally I like to fish a Texas Rigged worm either pegged or weightless. Just lift it up and drop it down like a “yo yo”. If there’s a snag give it a slight rip and let it fall just like with a lipless crankbait. This type of setup works great around hydrilla and milfoil.

When most people think of weedless lures they don’t think of spinnerbaits and buzzbaits, but that really is a shame. They both cover a lot of water fast and you can really rip them through heavy cover. Whether you’re fishing along riprap, lilypads, tall grass or just trolling through deep water a spinnerbait will really come in handy.

Both spinnerbaits and buzzbaits need to be worked the same way.  Reel them in fast so that they stay just above the weed beds.  Whenever I’m having an unlucky streak I bring out spinnerbait and quickly work it across the lake (here’s one of my favorite buzzbaits).  It doesn’t matter where you are a good spinnerbait or buzzbait will bring in a ton of bites.

I love to fish tubes whenever I come across a heavily fished lake.  When bass start to get leary of traditional setups I’ll bring out my Strike King Tubes.  With a simple Texas Rig you can fish a Tube through even the thickest weeds.  Bass can’t resist the realistic movement that a well placed tube produces.

When you’re not sure if you want a traditional hard lure or soft plastic worm it’s time to bring out your Brush Hog Lure.  The Zoom bait Brush hog can be fished in just about any rigging that you can think of.

Hog’s are great baits that can be fished weightless, Texas Rigged, Carolina Style, pitched or swam through heavy cover.  With a design that looks almost like a lizard, crawfish and worm combined it truly is Frankensteins Monster.

My two favorite topwater lures are the Arbogast Jitterbug and Rebel Pop-R.  Both these lures produce a lt of commotion in the water and really promote topwater strikes.  I can almost guarantee you’ll see a bass jump out of the water striking these two lures.

Weedless spoons not only have a little bit of weight behind them they are also an excellent way to beat the weeds. Manufacturers claim that spoons are 100 percent weedless and I’ve found that’s been pretty darn close to being true.  You might get a little bit of algae here and there, but for the most part your spoon will stay completely clean.

There are a ton of great spoons on the market and they’re all pretty much the same.  Personally I stick to the spoon that first made a name for itself. The Johnson Silver Minnow has earned a spot in my tackle box for as long as I can remember.  Affordable and highly effective, its simple design is hard to beat in the weeds.