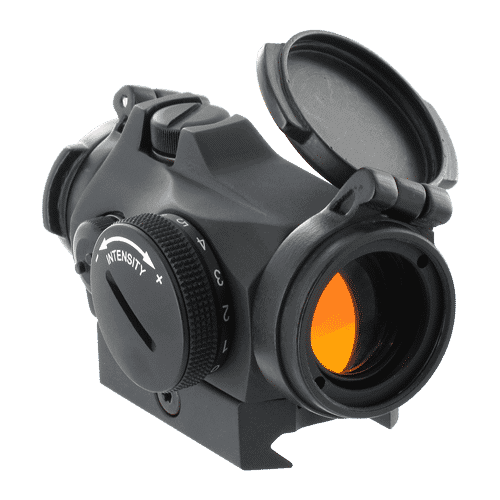 Aimpoint sights are some of the best sights available on the market. Aimpoint manufactures high quality red dot sights for law enforcement, military, civilian tactical and hunting uses. Aimpoint red dots are well known in the military community and come standard issue for many military units. When your life depends on your gear there’s no better choice than Aimpoint.

What is The Best Aimpoint Sight For The Money? 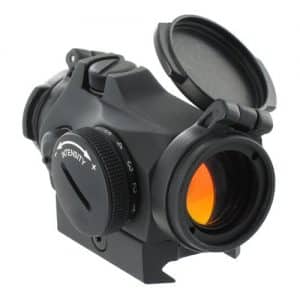 In my opinion the Aimpoint Micro T-2 is the best all around red dot sight for the majority of people. The Aimpoint Micro T-2 is the perfect miniature red dot for short range target shooting. This sight works well with just about any rifle on the market. It’s perfect for close combat purposes that need a lightweight easy to maneuver scope. This red dot doesn’t take up much space on your gun and won’t affect your mobility. The aimpoint is the perfect red dot sight for shotguns, short barreled rifles, pistols and anything else you can imagine.

The Aimpoint Micro T-2 is one of the best red dot designs in their lineup. This sight weighs in at a mere 3.7 oz including the mount. The Micro T-2 has a 1x magnification so it is designed for close to medium range use. You will need to add an additional Aimpoint magnifier if you want to stretch out your shooting distance. This unit has a 2 MOA reticle so it is a good balance between accuracy and visual difficulty. The Micro T-2 is compatible with all night vision optics currently on the market. It comes with 4 night vision settings and 8 standard daylight settings.

As with most Aimpoint sights the Micro T-2 provides a crystal clear sight picture that can be seen in all lighting conditions. You would almost have to try to break this sight. It should survive any real world conditions you throw at it. If that isn’t enough the battery life on this red dot will allow over 5 years of constant operation with one battery. This is a sight that you can depend on in any situation. This isn’t the cheapest Aimpoint sight in their lineup but it is easily the most versatile. 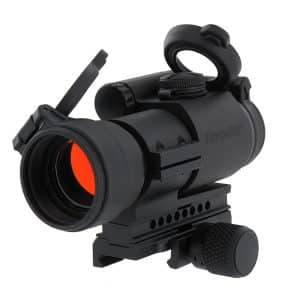 The Aimpoint Pro Patrol Rifle Optic is the workhorse of their lineup. The Aimpoint Pro is actually their budget model even though the price might not look like it. Even though this is their entry level optic it is still going to beat out most other similarly priced red dots on the market. Where the Aimpoint Pro stands out compared to the competition is their battery life. This red dot is able to last continuously on for up to 3 years. None of the competitors even come close to achieving this kind of battery life at a similar price.

The Aimpoint Pro red dot is noticeably larger than the Aimpoint Micro as the name implies. That doesn’t mean that this scope is big. It weighs in at 7.8 oz and is perfect to pair with an ar15 or any other short to medium range rifle. With the 1x magnification and 2 MOA optical specs this scope is designed for close to medium ranged shooting. For the price you can’t beat the dependability and versatility of this red dot. Like the rest of the lineup the Aimpoint pro can take some serious abuse. This sight is resistant to most oils and can be dropped in water up to 150ft. It can withstand virtually any climate on the planet and perform flawlessly.

The Aimpoint Pro sight comes complete and ready to mount. This unit can be easily mounted on just about every standard rail system. The Aimpoint Pro can even be used with any type of magnifier or night sight on the market. The applications for this red dot really are endless. This sight is trusted by countless law enforcement agencies and civilians alike. 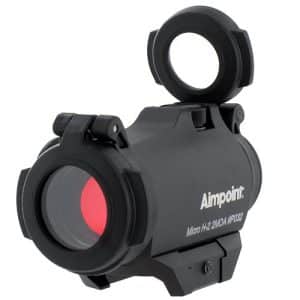 The Aimpoint Micro H-2 is the little brother to the Micro T-2. The Aimpoint Micro H-2 is the civilian version of the H-2. It is almost exactly the same sight as the Micro T-2. The main difference between these two sights is the use of night vision optics. The H-2 is not compatible with night vision optics. Side by side you can’t distinguish between these two sights. The only other difference is that this sight is only submersible up to 15ft vs 83ft. This won’t be much of an issue for the majority of people. So if you don’t ever think you need night vision save yourself a few dollars and buy this sight.

The Aimpoint H-2 was designed to be primarily used by hunters. This micro sight was redesigned from their previous model to both improve the durability and clarity of the scope. These sights pair perfectly with a magnifier and don’t have any distortion like the previous generations. Ready for most environmental conditions you can expect this sight to last. The sight was redesigned with a reinforced house body and flip-up covers to protect the lenses. The new optical lenses and coatings significantly improve the clarity and performance of this sight. This is a great Aimpoint sight for anyone that wants a slim lightweight red dot and doesn’t need night vision.

The Aimpoint CompM4 and CompM4s are 2 of the most rugged sights on the market. The only difference between these two sights is there battery location. These are the best sights that Aimpoint has every produced. These sights are soldier tested and combat proven. They are extremely rugged high quality products. Aimpoint has provided the army with over 1 million of these red dot sights and they are nearly indestructible. These sights are the standard infantry sights in many NATO countries.

Aimpoint Comp M4 series sights come complete and ready to mount. There are very few sights on the market that even come close to competing with this sight. This series of sights is rated to last up to 8 years or 80,000 hours on a single battery. That is 80,000 hours of continuous use with the optic turned on. On top of that both M4 sights take a standard AA size battery which can be found anywhere. These sights are submersible up to 150ft and can be used virtually anywhere on the planet without issues. These sights will hold zero under almost any circumstances. This is easily the best Aimpoint sight on the market and probably the best red dot as well.

Why Does The Military Choose Aimpoint Red Dots?

Aimpoint red dots have proven themselves for years in the U.S. Army and other military branches. What makes Aimpoints stand out from other optics is their simplicity and durability. They use a very simple traditional scope design that any marksman is accustomed to. So it shouldn’t take long to learn how to use the red dot. This is the beauty of these sights. They were designed so that any soldier can learn how to quickly engage their target. This ease of use significantly reduces necessary training time and costs associated with training.

Aimpoint sights are extremely durable and are capable of performing in even the most demanding situations. They can be knocked around without any loss of accuracy. Aimpoint sights when zeroed in properly should never lose zero. These sights are rugged enough for real world conditions and traditionally waterproof and shockproof. Like with any red dot sight you will still want to cowitness your sight. The battery life is where Aimpoint sights really shine. Most Aimpoint batteries last for years constantly running, but I would recommend changing it once per year. You don’t want to be at the range with a very expensive paper weight mounted to your gun.

Which Aimpoint Sight Should I Choose?

If you are new to red dots or optics in general, you might not know how to choose a high quality sight. For the most part you get what you pay for and Aimpoint red dots are no difference. Aimpoint sights are generally on the more expensive side so you really don’t have to worry about quality control. You will be safe and satisfied with just about any Aimpoint purchase. So what you are really looking for is differences in size, and MOA .

Which is the Best Aimpoint For The Money?

Most people would be happy with any of these sights.  Most shooters will find that the Aimpoint Pro meets all of their optic needs. You simply can’t beat the ruggedness and clarity of this sight for the price. People who want a little more versatility should opt for the Micro T-2 or Micro H-2. These two micro sights can be mounted on anything from a pistol to an AR15. They really are the most versatile sights in their lineup. If you don’t care about price and simply want the best red dot period, go with the CompM4 or CompM4s. The only difference between these two sights is the location of their battery compartment. They really can stand up to any task you can think of, civilian or military.