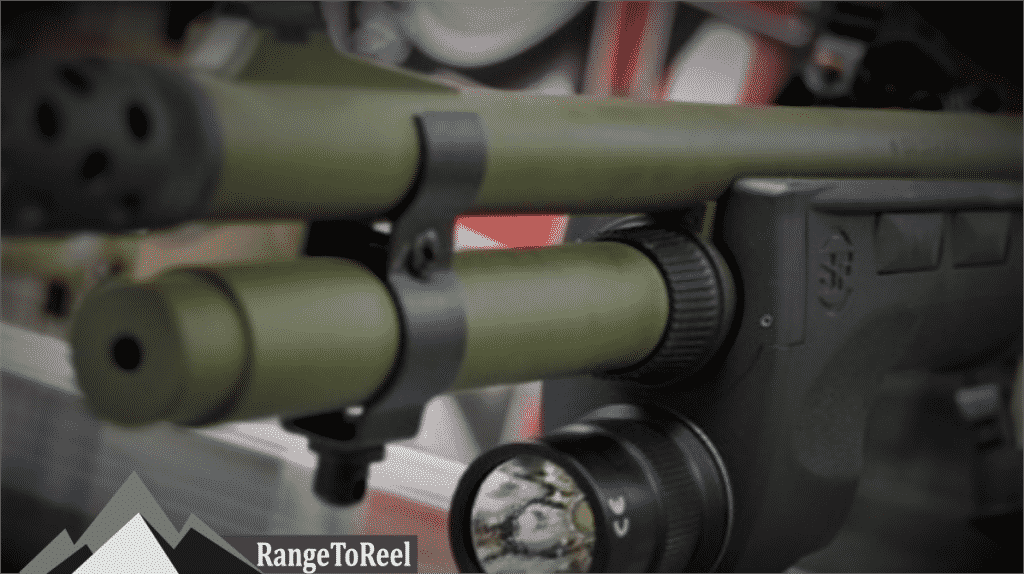 It doesn’t matter if you’re using a pistol, rifle or shotgun you need to always be able to clearly see your target.  That’s easier said than done at 3am when it’s pitch black outside.  You can either stumble through your house like a retarded bat or bring along a flashlight.  While a skilled shooter can carry a typical flashlight with a pistol.  It’s a lot harder to employ this tactic with a shotgun used for home defense.  Luckily there are other alternatives that mount directly to your gun.  A good shotgun light will brighten up your surroundings while allowing you to have a firm grip on your gun. 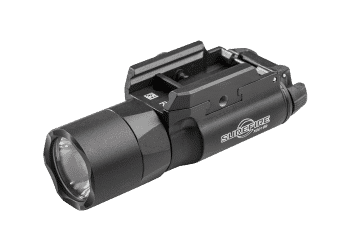 If you’re looking for the absolute best weapon light on the market you should go with Surefire.  Surefire makes some of the brightest and most durable weapon lights on the market. Surefire lights are designed specifically for military and law enforcement use. For a home defense gun you can’t beat the Surefire X300 weapon light.

Like everything in life, you have to pay for quality, and the Surefire light is expensive.  At nearly double the price of the competition you’ll have to judge whether it’s worth it the additional cost.  Surefire really sets itself apart from the competition offering one of the brightest lights on the market.  Producing over 600  lumens the X300 will easily light up an entire room or illuminate your backyard.  The precision lens creates a smooth tight beam for your target, with a surround beam for peripheral illumination.  You’ll be able to engage threats at longer distances and as you know distance increases safety.  The light is built out of a high strength aerospace aluminum with a mil-spec coating.  The body is completely shockproof and weatherproof and coated with a durable scratch resistant coating.  Designed to be both ergonomic and completely ambidextrous.  You can easily switch between the momentary and constant on illumination settings.  On a shotgun you’ll most likely want to add a compatible long gun tape switch.  If you can afford the cost you aren’t going to beat a Surefire Weapon Light. 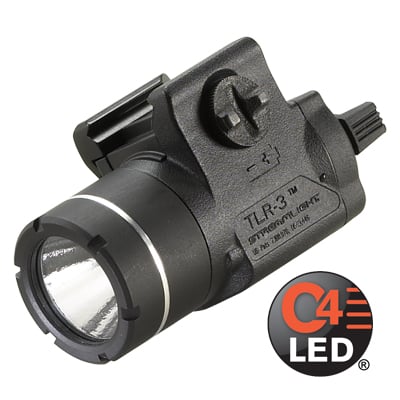 Not everybody can afford the above Surefire light.  Luckily Streamlight makes a much more reasonably priced option.  Streamlight’s TLR-3 weapon light offers an extremely durable housing with a bright 125 lumen light.  At a fraction of the price of the Surefire light it’s well worth a look.

If you’re a police officer or regularly encounter dangerous threats you’re going to want the above Surefire light.  For everybody else the Streamlight TLR-3 will work extremely well.  Streamlight really delivered with this affordable weapon light.  Using an extremely durable housing you won’t have to worry about damaging this light.  It’s completely impact resistant and waterproof up to 1 meter.  Ultra lightweight and compact, it’s the perfect size for any mid sized handgun or long gun.  Featuring the latest C4 Led technology the TLR-3 light puts out 125 lumens!  That’s enough to light up any interior room and most of your back yard.  With a 1.5 hour run time you won’t have to worry about constantly changing batteries.  Featuring ergonomic ambidextrous controls to switch between momentary and steady ON/OFF.  For the price Streamlights TLR-3 weapon light is going to be hard to beat. 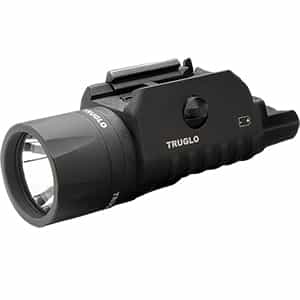 If there’s one company that can compete with Streamlight’s value it’s TRUGLO. TRUGLO’s Tru-Point light is not only a light, it also has a built in class 3R laser.  With Truglo’s Tru-Point light you’ll not only light up the environment, you light up your target as well.

This Truglo light is priced similarly to the above Streamlight.  Featuring a ultra bright 200 peak lument flashlight that will brighten up the dimmest rooms.  You don’t buy the TruPoint light for the flashlight.  What’s really cool is the built in 650nm red or green laser(green version is more expensive).  It’s one of the only weapon lights that have a laser built into the inside of the housing.  Easily switch between the three lighting modes, constant laser, flashlight or laser/light combo.  While it doesn’t have truly ambidextrous support, you can switch the back plate allowing you to control it left handed.  You can quickly switch the Tru-Point light between weapons using the quick detach lever.  If you’re looking for a laser/light combo Truglo is one of the best. 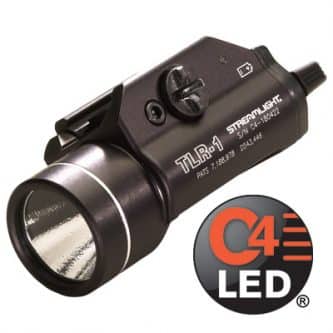 Streamlight’s TLR-1 Flashlight is a little more expensive than the TLR-3, but is well worth the price.  Streamlight paired it’s durable housing with one of the brightest flashlights on the market.  At a fraction of the price of the Surefire the TLR-1 is well worth a look.

Streamlight designed its TLR-1 flashlight to fill the niche between pro and consumer grade weapon lights.   By pairing a sturdy design with an extremely bright flashlight they were able to make a affordably priced light that performs like a pro model.  Where the TLR-1 flashlight really stands out is its brightness.  With over 800 advertised lumens it’s like mounting a spotlight on the end of your shotgun.  It beats the Surefire flashlight in peak brightness, but lacks the sophisticated Omni-directional  lighting system found in the more expensive unit.  That being said it more than meets the brightness needs of the average consumer.  The housing is both completely shockproof and waterproof up to 1 meter.  Featuring ambidextrous controls with multiple lighting modes.  Choose between strobe, pulse and continuous on lighting modes.

Nobody can ever tell you what the best type of home defense gun is.  The debate will likely rage on for eternity without any real answer.  Generally people either lean in the shotgun camp or pistol/rifle.  The limited range of a shotgun makes it a great choice.  Especially since you can never be certain exactly who or what is going to be on the other side of the wall.  That being said even the best shooter is going to panic when they hear a noise at night.  A mounted shotgun light is just one less thing you have to worry about before you assess the threat.

How To Mount a Shotgun Light

Mounting a shotgun light is a little harder than with other firearms.  Unless you buy a shotgun marketed for home defense it probably won’t have a forward mounted rail. So you’re either going to have to mount a forward rail specific to your guns caliber like this or buy a basic tube mount.  Just make sure you match whatever mount you get to the guns caliber.  Personally I like the added versatility of a forward rail, but the tube mounts tend to be a little more secure.  There’s less that can go wrong with a tube mount.

Which Shotgun Light is Right For You?

If you can afford it you should definitely buy the Surefire X300 weapon light.  It was designed to be used by the professional law enforcement and military communities.  If you are a civilian you’ll probably be able to save some money and get the Streamlight TLR-1 Unit.  It’s a fraction of the price and works like a professional unit.  Budget options to consider are the Streamlight TLR-3 and Truglo Trupoint.