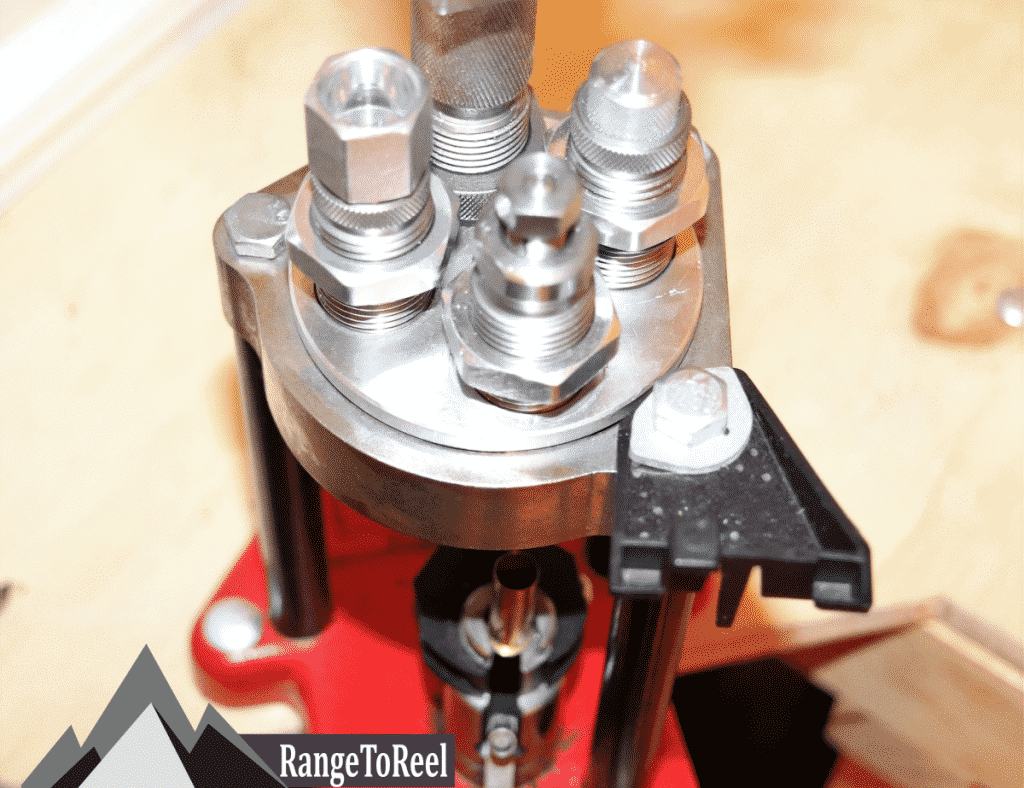 While using a turret press you completely finish loading the bullet in one series of lever pulls without taking the bullet out of the shell holder. How many lever pulls that is will depend on the die set that you choose.

What is The Best Turret Press For Reloading?

Where the Lee turret press really shines is the usage cost. Not only is this press significantly cheaper than the competition all of the accessories are also cheaper. You can purchase enough additional turrets to cover all your dies without going over the cost of the competition. The ability to buy additional Turrets cheaply is one of the best features on this press. You can buy an additional turret for every one of your dies and never have to adjust your dies between caliber changes.

The Lee turret press is the only turret press that offers auto-indexing. In my opinion auto-indexing is a must have feature if you want to go fast. Auto-indexing means that for every stroke of the ram the bullet will automatically go to the next die. With a manual indexing press you have to flick the turret over to the next die with your hand. The only problem with lees auto indexing feature is it occasionally is slightly off. To fix this all you have to do is touch the turret and move it into the correct spot.

The only real issue I have found with the Lee Classic Turret press is the priming system. The priming system uses a plastic tray and piece to put your primers on the priming ram. This plastic piece seems very flimsy and I can’t see it lasting as long as the press will. The priming system is also slow and hard to use but you will eventually figure out how to use it. I would definitely recommend purchasing a hand priming tool if you are going to purchase this press.

The only other turret press that I can recommend instead of the Lee is the RCBS Turret Press. There are two main differences between the Lee and the RCBS turret press. The RCBS turret press is manual indexing, which means that between each stage you have to push the turret over to the next die. Honestly I think this is a pain and that’s why I don’t own this press.

The other main difference that the RCBS Turret press has is that it has a 5 hole turret. You can purchase additional RCBS turret heads separately but they are significantly more expensive than Lees turret heads. The main advantage of owning a 5 hole turret is that it gives you the ability to add a Hornady powder cop die or RCBS Lock-Out Die. A powder cop die essentially checks your case to make sure you don’t have a double charge. If you accidentally throw a double charge the powder checker will let you know. You can also do this with 3 die sets but it’s nice to have the option to use a crimping die with the powder cop.

Like all RCBS products this turret press is made to last. This press is a solid chunk of steel and it should last multiple generations. RCBS reloading equipment has been around for close to 60 years and you still see some of their early presses at flea markets and garage sales that are in near perfect condition. If you don’t think you’re ever going to purchase a progressive press this press is definitely the one to buy.

I might be the only one who thinks this but I’m really not a fan of the RCBS priming ram. Not only is the design wonky, I’ve had issues with inconsistencies with primer placement. A lot of the primers weren’t fully seating and were seating crooked. Luckily RCBS has excellent customer service and they promptly resolved my issues.

The Turret Press is Great for a Beginner

While reloading it is very easy to make accidental mistakes as a beginner. This is exasperated by the fact that you will more than likely have to read a reloading manual while you are operating the press. While learning it is very easy to accidentally double stroke the ram causing a double powder charge. At least if you are operating the press in single stage mode you will be able to look over your bullets for consistency.

Purchasing a turret press from the start gives you a longer chance to learn without feeling like you need to move up to a progressive press. If you are loading a decent quantity of bullets you will eventually need to upgrade. It is better to learn on a turret in single stage mode so that when you feel like you are ready there is room to work with. You will see a significant increase in bullets per hour when jumping from a single stage to turret. This will give you more room to learn before jumping into a progressive press.

Is a Turret Press Really that Much Faster Than a Single Stage Press?

Determining if You Need a Turret Press

Depending on your budget and how frequently you shoot a turret press can be an excellent choice over a single stage or progressive press. The main question you need to ask yourself is how many bullets do you really need to reload at one time. If you are shooting enough that you need 1000 bullets per week than I would definitely get a progressive press. If loading a few hundred bullets in a sitting is enough for you to shoot for a month a turret press would be a better option.

If you like the idea of a 4 hole turret press make sure you check out the Lyman Turret Press and Redding Turret Press. I can’t justify recommending them over the Lee Classic Turret Press because of the cost difference between the three presses. They might be stronger than the Lee but I don’t see where you’re getting that much more for your money.

If you want to buy a 5 hole turret press than your only real option is the RCBS Turret Press. You can’t go wrong with an RCBS product since they’re made to last. My recommendation for the best turret press is the Lee Precision Classic Turret Press. You can’t go wrong with this press I would argue that this is the overall best reloading press for the price.