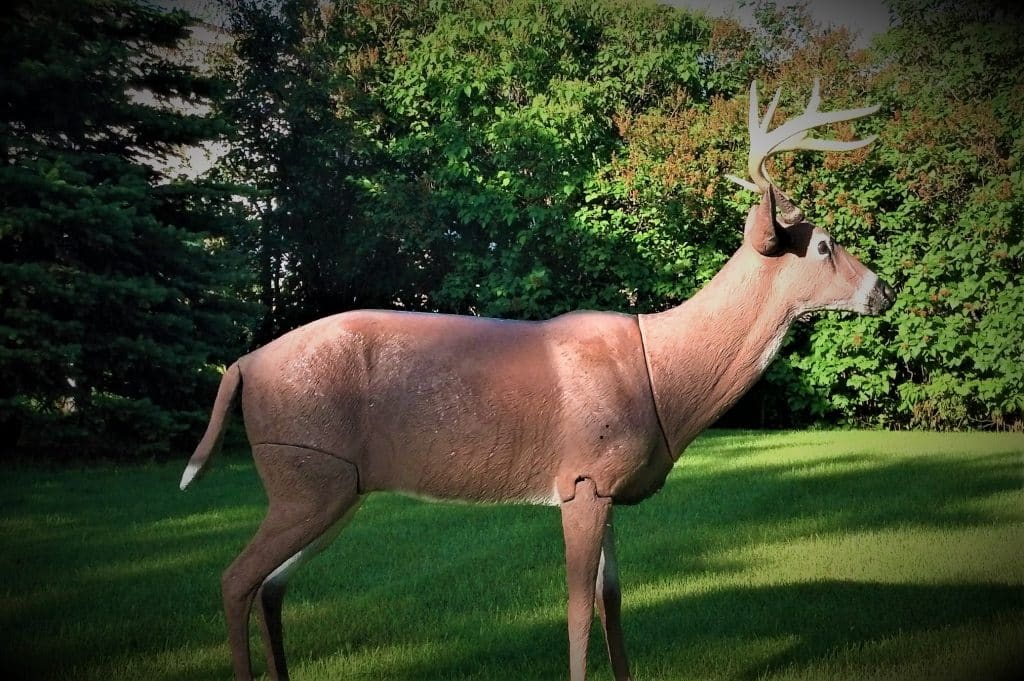 Most hunters have a love-hate relationship with white tail decoys. When they work they work really well and deer just ignore their surroundings, but when they don’t they send up so many red flags’s that whitetales flee at the sight of them. Without the proper set up and presentation you’ll be doing more harm than good. So how do you properly use deer decoys?

How To Use Deer Decoys

It doesn’t matter if that’s positive or negative attention. The decoy will quickly become the deer’s main focus completely ignoring you up in your stand.

Best Time of Year to Use a Decoy

The best time he year use a decoys during the early-season, rut and late season. This is the time a year that deer are in the mood for socialization and breeding. Of course during the rut setting out a buck or doe decoy will offer a nice little trap for a dominant buck with love on his mind. 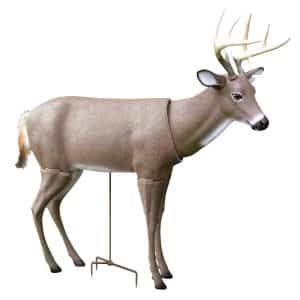 Personally I like to use a large buck decoy instead of a doe, but your mileage may vary.  I’ve been using this Primos Scarface Decoy for the past couple of seasons and had great success with it.  The biggest advantage to a buck decoys that it’s going to draw bucks rather than does.

If you can only afford to buy one decoy I would highly recommend getting a doe. Buck decoys will most likely only attract bucks, whereas a doe decoy attracts both bucks and does. The bow season runs for a long time and you don’t want to get tied into one sex.

I find that whenever I put out a doe decoy I end up with a bunch of does hanging around rather than my target buck.  Ohio only allows you to kill one antlered deer so this isn’t necessarily a bad thing.  After I get my first buck I’ll hunt the rest of the season with my cheap Flambeau Doe Decoy which really brings in the does.

When to Use a Deer Decoy

You should really only use a decoy when you actually need it. Some deer stand setups won’t see much benefit and could possibly hurt your chances. If you’re hunting a field edge, funnel, water source, or scrape you probably won’t need a decoy.

If you’ve done your scouting right it seems like deer will naturally role in leave your decoy at home. Decoys could make deer question the security of your trap scaring them off.

Not everybody can get the perfect hunting stand that funnels big bucks right to your feet. In this instance you might just need a decoy to nudge them your way.

Larger fields are going to be particularly difficult to draw deer towards your stand. Deer altering their entrance route and exits will be particularly hard to pattern. In this instance a well-placed decoy just may draw him close enough for your bow to reach.

Get The Right Decoy For Your Style

The type a decoy that you choose should complement your particular hunting style. Hunters typically fall into two styles, aggressive and passive or some mixture of the two.You have your 3-D decoys which are bulky and cumbersome and 2-D decoys which are meant to be mobile.

Use 3D Decoys For Blind and TreeStand Hunting

When most people think of the deer decoy they picture the full sized 3-D decoy that have been around for years. 3-D decoys are meant to be left out in the field catering to a passive hunting style. Whenever you hunt from a ground blind or tree stand you’re going to want to use a 3-D decoy.

Once you find the best location for your tree stand you’re going to want to work the decoy naturally into its surroundings. Trim the area around the it and get the ground ready for decoy insertion. You don’t want linens and branches smacking the plastic and making it sound unnatural.

Leave 3D Decoys in The Field

Whenever you hunt private land you should consider leaving your 3-D decoy in the field. They are cumbersome and really annoying to carry in and out of the woods every time you go out to hunt. You’re going to want to hide the decoy with natural cover and stash it out of eyesight when not in use.

Only Use 2D Decoys for Mobile Hunting 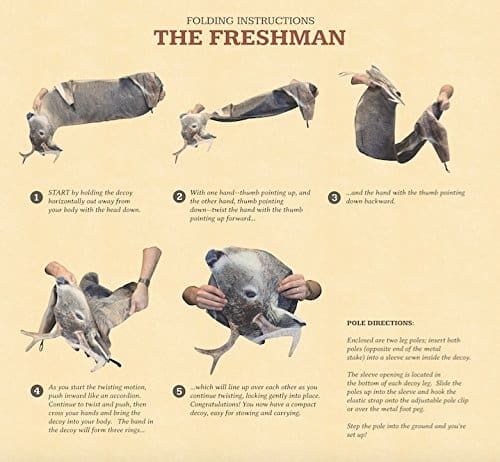 The other type a decoy that you probably don’t have a lot of experience with our 2-D decoys. To 2-D decoys are meant for the mobile hunter that needs to lure bucks into bow range. The only time I’m really going to use a 2-D decoy is when I’m hunting public land and can’t leave a decoy overnight.

Montana Decoy really owns the 2D decoy market with their foldable decoys.  They have both 2D buck and doe decoys and just about every other animal you could possibly want to hunt.  The best thing about them is that they fold flat into a 20″13″ package and can be setup in seconds.

When you need to quickly move your decoy in and out of the field you’re going to want to use a 2D Decoy.  While they’re designed specifically for spot and stalk hunting they’ll work just as well with your favorite climbing treestand or portable ground blind.

When looking for the perfect tree stand or blind location always keep in mind where you’re going to place your decoy. Went bow hunting I like to keep my decoy close to me. Drawing deer in as close to my arrow as possible.

In less you elated really unique location that funnels bucks close to you you’re going to want to keep your decoy as close as possible. Most of the time bucks will circle a decoy showing signs of hesitation and aggression.

How Far Should The Decoy Be To Your Stand?

If the decoys set up too far away you could be forced to try and make an impossible shot. Remember as you get farther away the deers kill zone will shrink making the shot harder.  You should try and keep your decoy within 20 yards so that the buck stays within your range.

Personally I like to keep my decoys within 10 yards of my tree stand. That guarantees that if a buck reacts to my decoy he’ll be within my effective shooting range.

When your stand location limits a bucks movement behind your decoy you might want to extend the range forcing him between you and the decoy.Anytime you set up near a river, steep bank or thick foliage you’ll want to use this method. 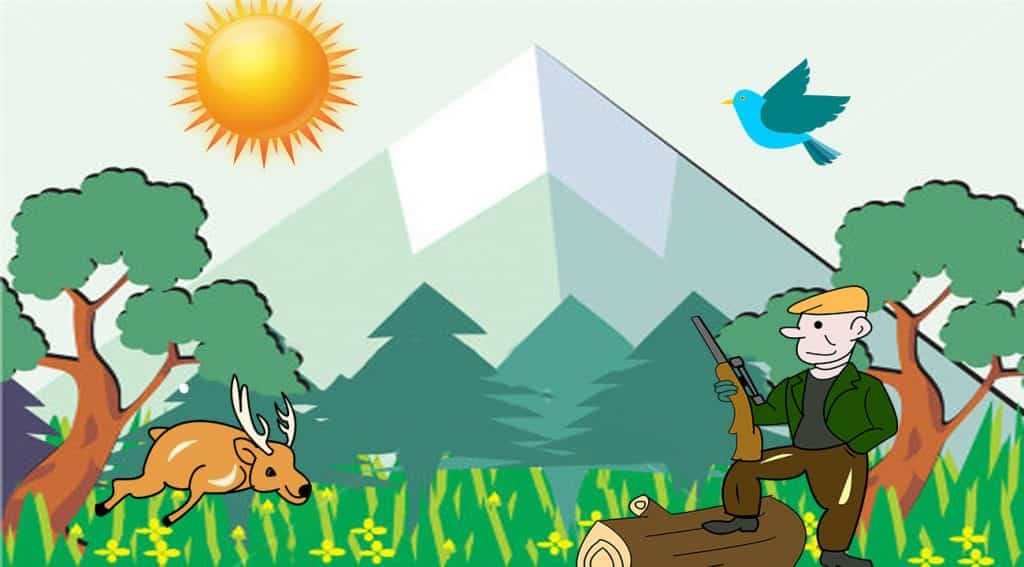 It doesn’t matter if your decoy looks fake out-of-the-box or has been weathered past its optimal life you can fix it with a little work. When you’re plastic decoy looks more like a yard decoration than a hunting tool you’re going to need to fix it by increasing the realism.

Use Deer Calls and Vocalizations

By far the easiest way to make a decoy look more realistic is to use vocalizations. A simple grunt or growl will make a deer take a second look at your decoy. Even if you’re using a buck decoy you might want to throw in a few doe grunts to lure in that territorial buck.

Most hunters bring calls and antlers into the woods anyway so why not using the make your decoy look more realistic. Just make sure you don’t overdo it late in the season when deer start to get more fearful.  Most of the time I’ll use a combination of a Fawn Bleat Call, Grunts and antler rattles to make things a little more realistic.  I have a few expensive calls I bring out late in the season, but most of the time I use cheap Primos Calls to bring in the deer.

Just like vocalizations and calls make decoys look more realistic scents will add that extra push over the edge.  It’s easy to add scents to your decoy.  Follow my guide for making your own homemade scents or purchase a ready made solution.

I’ve had a lot of luck using Tink’s Doe In Rut Buck Lure.  Spray a little bit of the Tink’s lure on a drag rag or scrape and bucks will really take notice.

There are a ton of great hunting tools on the market, some work better than others. Motorized tail waggers like the Primos Whitetail Deer Tail Offer a realistic presentation, but I’ve had just as much of luck with an old rag blowing in the wind.  Any little bit of lifelike movement will help.

I’m sure you’ve been full once or twice driving by a realistic decoy back in the field. It’s the same way with deer. The closer the deer gets to you with a decoy the less realistic it seems.

You should only rattle at deer further than 100 yards and that’s only if you have excellent cover. A quick rattle or grunt at close range will give away your position in seconds.

Shoot Fast Before The Deer Gets Spooked

Here are stupid you only have so long before they notice a decoys actually a trap. Things will happen surprisingly fast after the buck notices your decoy. If they take the bait you’ll have a shooting opportunity in seconds so be prepared. At the first sign of deer have an arrow nocked and ready to fly.

Keep an eye out for the telltale signs of an aggressive buck. Look for that stiff legged gate, bristling hair and ears laid-back. Whenever this occurs you want to take a shot as soon as possible. You’re going to be battling a fast-moving buck that could quickly destroy your decoy or get spooked when he draws near. Once he strikes plastic healthfully in a matter of seconds.