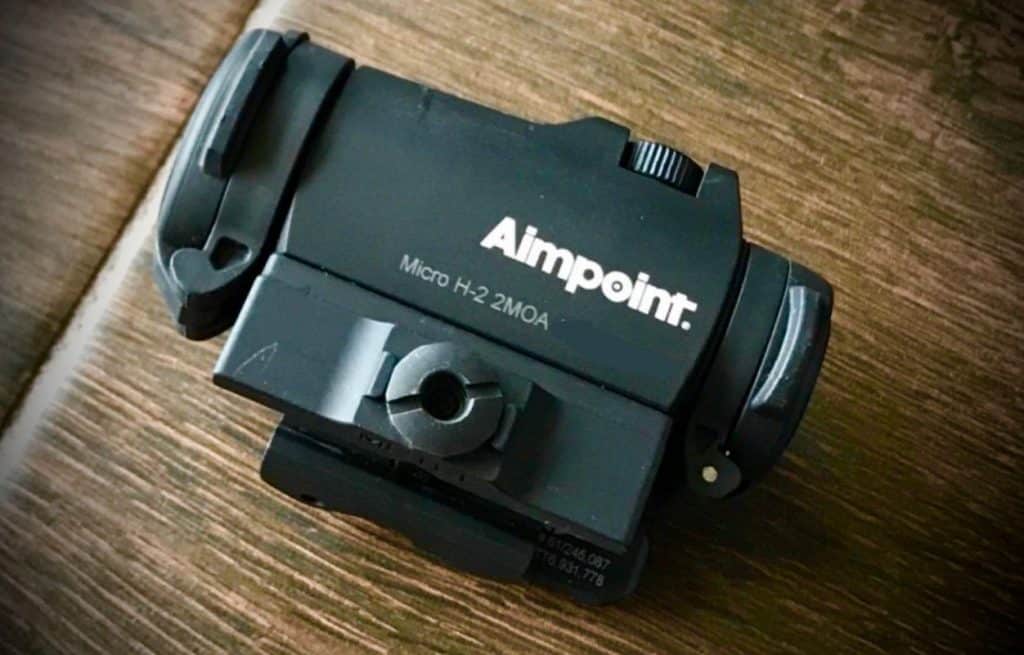 Aimpoint is the oldest producer of Red Dots in the world, so it’s no surprise that they are still leading the pack. With a 30 year track record, they’re known for quality arguably building the best red dots in the industry. How have they stayed the industry leader? They build some of the most rugged well designed optics on the market, but that comes at a price.

If you don’t know the difference between an Aimpoint T2 and H2 you are not alone. These sights are the improved version of the original Micro H1 and T1.

Side by side you probably wouldn’t even be able to tell the difference. With such a slight difference you’re preference will largely depend on your shooting style and price range.

Are Aimpoint Optics Right For You?

Before you pull the trigger and buy one of these micro red dots make sure you really need one.  Honestly 99% of the civilian population will never actually need to spend the money on Aimpoints.

Most people should save their money and buy a Sig Sauer Romeo 5.  Sig’s Romeo 5 is about the same size as the T2, boasts a 40,000 hour+ Battery Life and Offers an extremely durable waterproof frame with a lifetime warranty.

They are both micro sights designed to be used on any type of gun. They can be used on anything from a pistol to your favorite AR15. Offering a fixed 1x magnification will limit your range, however you can easily add a magnifier. Check out the image below with the T2 next to my Aimpoint Magnifier.

Both Have Great Battery Life

Like the rest of Aimpoints lineup you’re going to get an extremely long battery life. You don’t have to worry about turning either model off after your trip to the range.

On moderate brightness you should expect at least a 50,000 hour(5 year) battery life on medium . At its lowest setting the battery would probably outlast most of us at 500,000 hours or 50 years.

The biggest differences between these two red dots is who they are marketed towards. The Aimpoint Micro H2 is marketed towards the civilian hunting population.  Waterproof, shockproof and nearly indestructible, it’s the perfect addition to your hunting rifle.

With a fixed 1x magnification and 2MOA reticle, most shooters will use the Micro T2 at close range.  If you want to extend your range throw on a magnifier like this Vortex Optics 3x Magnifier.Due to the size of this scope you should have plenty of room on your rail for a separate magnifier.

Weighing in at only 3 oz the Micro T2 it’s one of the smallest optics on the market. Such a small size makes it perfect for just about any type of firearm. If you have a rail or can safely mount one you should be good to go. You can even mount it to your pistol(Trijicon’s RMR is Probably a Better Choice) and short barreled rifle.

Where Aimpoints Micro T2 really sets itself apart from the H2 is night vision capabilities. With 4 night vision modes it can be paired with any night vision scope currently on the market. If you have the extra cash or work in the Law Enforcement/Military you should definitely spend the extra money on the Micro T2.

Full Disclosure: I don’t have a ton of experience with the Micro H2.  With so many night vision scopes filling up my gun safe I just couldn’t convince myself to buy the H2.   Don’t worry I won’t leave you in the dark, my neighbor leant me his to try out for a couple days.

On  my initial inspection of the H2 I couldn’t see any immediate difference from my T2.  After a 30 seconds or so, “Ahh Yes I See The Difference”, there’s 12 brightness modes on the H2 vs 8 Brightness and 4 Night Vision Modes on the T2.  Other than that they both look and feel exactly the same.

Aimpoint designed the H2 with the average hunter in mind. So obviously all features that aren’t necessary while hunting are removed from this sight.  You don’t get night vision and the cold/warm weather extremes were slightly changed.  Unless you live in a volcano you’ll never have to worry about weather fouling up the H2.

Just like the T2 it pairs well with just about any weapon the comes to mind.  I actually stuck it on my S&W 629 revolver just to see how it felt. Honestly I shot better with the H2 than my 4x32mm Simmons Handgun Scope.  It’s probably due to Aimpoints crystal clear sight picture.

After putting the H2 through its paces it went straight to my AR15.  Like almost everybody else that went with Aimpoint I have absolutely no complaints.

For most people your budget will be the primary deciding factor between these two units. Both of these sights look exactly the same and perform similarly but the H2 is considerably cheaper than the T2.

The primary reason for this price difference is the lack of night vision support on the Micro H2. I guess they figure if you can afford night vision whats an extra Benjamin.  With a few night vision scopes in my gun safe the T2 was an obvious choice for me.

You can mount both of these micro red dots on just about any rail. On your AR15 or Tactical Pistol you should probably go with a picatinny rail.  Some hunting rifles on the other hand come standard with a weaver rail.

Most weaver accessories can be mounted on a Picattiny Rail, but some picattiny accessories don’t fit on weaver.  So if you have the option you should always choose a picattiny mount.  Check out the video below for more information.

Both the T-2 and H-2 are small enough to piggyback on larger scopes. Weighing in at 3.7 oz with their rails, they can be mounted to any traditional long distance scope.

Most hunters aren’t going to want to use this feature, but it is available. Honestly 3.7 oz might not seem like a lot of weight, but every little bit of extra weight makes a big difference while hiking through the woods.

Piggybacking makes a lot more sense from a tactical standpoint. Law enforcement officers in particular never know when they will need a long distance or close encounter shot. The boy scout in me says that you should come prepared with both.

This was my main driving force when choosing between the T2 and H2.  With 4 different night vision modes you’ll find a mode that pairs well with your night vision scope.

The Micro H2 on the other hand is not compatible with night sights.

Both of these optics can be purchased in either a 2 or 4 MOA red dot reticle. The only major difference between these two sights reticles is in their uses.

Like all Aimpoint sights these two are about as durable as you come. It would be very difficult to do any real damage to either of these sights.

The Micro T2 is actually a little bit more rugged than the H2. T2 is submersible up to 80 feet where the H2 is only submersible to 15 ft.

There is also a slight difference in recommended firing temperatures. Unless you plan on shooting in the antarctic or next to a volcano I don’t really see those being an issue.

Both of these optics have extremely rugged designs. When comparing the Aimpoint T2 vs Aimpoint H2 it really is going to come down to personal Preference.

For the majority of people the H2 is going to be the good enough red dot. It’s way better than every other Micro Red Dot, but it just doesn’t have night vision compatibility.

You should only really buy the T2 if you are in the military/LEO or you are looking to buy night vision optics. Personally I use my T2 daily paired with a night vision scope.  The local coyote population has a hankering for my chickens that only a bullet can fix.